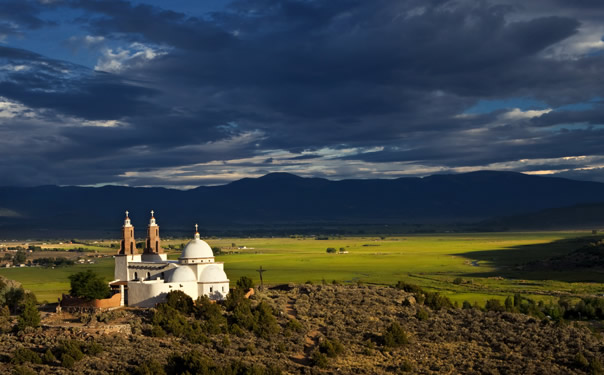 La Vega sits to the southeast of the oldest town in Colorado and is the only Mexican-Era land grant commons in the state. In 1863, villagers living in the Rio Culebra Basin allocated the commons 18 miles south to the New Mexico border. Today, 633 acres of La Vega remains and its fate rests in the hands of local descendants. A commission created in the ‘70s governs the commons, which is still a traditional, uncultivated wetlands used only for grazing cattle and horses for five months out of the year.

Running through La Vega is water from Rito Seco Creek and Río Culebra. It meanders through the meadow’s high grass and eventually finds it way to The San Luis People’s Ditch, an original acequia. The gravity-fed irrigation system was built in 1852 and it was eventually awarded the first adjudicated water rights in Colorado nearly a quarter of a century before Colorado became a state. Within the next decade, 14 other acequias were developed in the Culebra Watershed. Today, over 240 families in the Culebra watershed use acequias to irrigate over 24,000 acres of privately owned pastures and croplands.

With a little help over the years from government agencies and the eventual return of younger San Luis generations with knowledge of a world beyond the Sangre de Cristo’s, La Vega and the acequias are still an integral part of the town’s heritage and its future plans.